Home » Using Boredom and Curiosity to your Advantage

Using Boredom and Curiosity to your Advantage

Curiosity is something that always interests me. I have written about it in the past, but was drawn to looking at it again recently. There are several theories about what curiosity is and how it works; Curiosity Drive Theory, Optimal Arousal Theory, Incongruity Theory and probably more. They all deal with different aspects of what curiosity is.

Drive Theory considers that curiosity is part of a human need to reduce the discomfort felt when we are uncertain about somemthing.

Incongruity Theory suggests that we seek to resolve incongruity (differences) between something that happens and our existing understanding. So if something happens that doesn’t match our preconceived ideas of what should happen, we become curious and want to understand it.

Optimal Arousal Theory is more interested in why we seek out new and novel experiences. This is the account I am interested in for this article.

This theory, proposed by Berlyne in 1960,  suggests that humans need to maintain an optimal level of arousal. If we lack stimulation, ie. get bored, then we will seek out more stimulation – we will explore.

I have seen this represented as a bell curve most often, comparing level of arousal and level of performance and optimum level being the top of the curve. 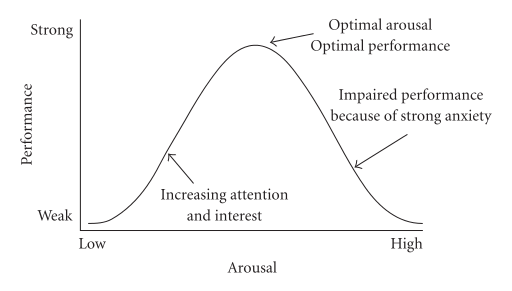 In video games, this concept could explain emergent gameplay. This is where players take the rules into their own hands and develop new ways to play. Based on this theory, as they hit a point where they are bored with the current state of the game, they find new ways to play. A game like Minecraft caters for this in extraordinary ways. When you are bored with the environment, change it. When you are bored of the gameplay, create new gameplay or even new games.

At the same time, if we are too stimulated, we may seek out a way to reduce the stimulation, otherwise, it can lead to stress or anxiety. It reminds me of Flow in many ways. You have to keep the level of arousal at an optimum level, in the same as you need to keep challenge and skill at an optimum level maintain engagement.

There are a few ways to make use of this information in gamification design. The first is to try and treat the way information is provided a bit like a mystery writer would. They never give you all of the information up front, they give you just enough to keep up those levels of curiosity – based on the Drive Theory ideas. You want to see the resolution of the mystery as it is uncomfortable to not know the answer. However, it is pleasurable to get the clues and solve them as it triggers the release of several neurochemicals (yes, there are theories about dopamine, noradrenaline, and serotonin – I will let you look into that, though.). That is probably why you don’t just skip to the end of the book, the anticipation of reward provides a more extended level of pleasure than the instant gratification of the reward itself!

So give just enough information for the user to perform the necessary actions, but leave them wanting more.

If for some reason you feel that there could be a dip in stimulation, that boredom may kick in, then leave things for them to find. Make reference to more information that they can access at their own leisure. Leave easter eggs or clues from them to find. Leave tools for them to build things.

Also, with our understanding of Flow, we could deliberately engineer curiosity by creating a temporary lul in the challenge presented to them. If we look at the flow graph, this would happen when they have a low level of challenge and a relitivly medium level of skill.

Curiosity is in us all, let’s see if we can use it to drive some more engagement!