Narrative is in my opinion, one of the most powerful yet underrated ways of improving almost anything! A good story can carry you through the most boring of times by creating the most exciting of images in your imagination.

However, building stories into certain, less “play” compatible environments can be a challenge. So can creating stories that fit with the very “stop/start” nature of many gamified environments.

First, let’s look at what narrative actually is. Put over simply, a narrative is just a story. However, the way I like to look at the difference between a narrative and a story is that a narrative is happening now, whereas a story has already just happened (and a collection of stories is a history…). 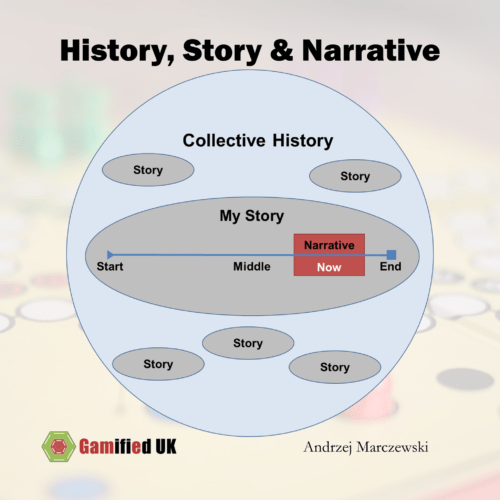 What it is is less important than how to actually use stories and narratives though! The point of the introduction series is to get away from philosophy!

Building a Narrative or Story

A story has to have a beginning, a middle and an end. “Once upon a time, something happened, the end”

There are many structures out there for building stories, the most famous of which is the Monomyth or Hero’s Journey  created by Joseph Campbell [1]

Many well-known stories either conform to this (such as Lord of the Rings) or have been deliberately built like this (Star Wars) and it is an incredibly popular structure for gamification (and game) designers.

The basic premise is that a normal person embarks on a journey that sees them taught, tested, failing, recovering, overcoming adversity and finally winning the day. Importantly, the journey takes them way out of their comfort zone and when they return, they are not the same person they were when they left.

Now, in some ways this is how learning works, We are set a challenge, we leave our comfort zone, are taught, learn new skills, fail, try again, eventually succeed and are different by virtue of having learned something new.

Personally, I prefer a simpler story, especially if I need to create a story that may or may not be linear. For example, if the solution needs a player to explore, the middle parts of the story may be uncovered in different orders each time they play. This means that each bit of story or “Narrative Atom” as I call them, must be self-contained and make some sense when seen outside of the overall context.

A narrative atom might look like a post-it note with “Bill was the last one to log in” written on it.  Upon reading this, you may not yet know who Bill is, but you now know what he did and that that will likely have significance to some larger story element moving forward. When you later find an employee profile for Bill and a note that says “Just to let you know, Bill was made redundant two weeks ago” written on it, you know that it is very likely Bill has been up to no good! Both those Narrative Atoms tell you something, but together they build a bigger picture and story.

I use the something I call the “Soap Hero’s Journey” as my model to build up small stories out of Narrative Atoms, so that you can have groups of disconnected narrative build into simple stories that then create the overall story.

This is much simpler. There is a call, a challenge, a transformation, a twist and some sort of resolution or outcome. Every T.V. drama has this kind of structure in it stories. Each episode is self-contained enough to make some sense on its own, but they often add up to create long-running arcs.

As a simple example of this structure, consider the following (you may need to zoom in);

This sort of structure gives you lots of flexibility but ensures you include some elements of interest in each part of the story.

A narrative or story needs a theme. It is easy to sit there and go “I know, I bet they will love pirates”. However, you need to actually know what they will and that the story will resonate or at least interest and entertain people. DO some research, ask the people that the solution is aimed at if they actually like pirates?! IF they hate them, find another route.

Also, you don’t need to be a literary genius to write a decent story for a gamified solution, but it does need to make sense and be consistent. Even if the experience is going to be non-linear, make sure you write it in one stream, then figure out where the breaks are for the narrative atoms and micro-story arcs.

If you are creating non-linear narratives then you need to understand what the essential components of the story are, things the player can not miss – because it is likely that with more autonomy they will miss some of it! That is where the next bit comes in…

If your story is non-linear, you need to understand how it will be played out. How much choice are you going to really give players? Are there multiple endings, are their multiple starting points? What are the key narrative atoms, or micro-stories that must be seen in order for the player to have a complete story at the end of the game?

A simple example of a branched, non-linear story is a Fake or a Forced choice narrative. The start and the end are the same for every playthrough, but the choices in the middle can change.

That can be as simple or as complex, as you like – as long as the player is forced down a path eventually that gives them enough information to create a full story.  An example of this is a game like The Walking Dead from Tell Tale games. The start and the end are the same (more or less) for every player, but they make choices in the game that makes their playthrough unique. Some elements of the ending may change, like how many companions survived and how certain non-playable characters now feel about you, but the core of the ending is always the same.

Real choice is possibly a better pay off for the player, but much harder to write and maintain!

The choices a player makes gives them a totally different ending. There may be many many endings created, or it could be a dynamic ending where the narrative wraps up as a summary of the player’s actions in some way. 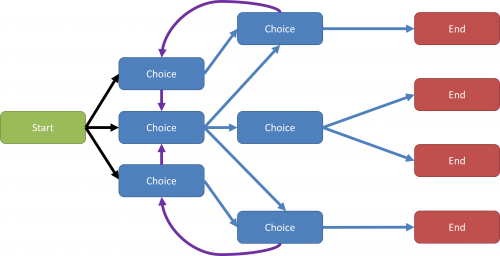 A great example of this is 80 Days from Inkle. THis is one of the best games I have ever played as each playthrough is unique. Whilst some elements may repeat, the wealth of choice sis mind-blowing and the outcome of each playthrough is always different, even if only subtly at times (at other times dramatically!)

If you want to learn about narratives in games, there are some that I think are must plays!

Nobels ODR 1 BC Over Drive with Bass Cut