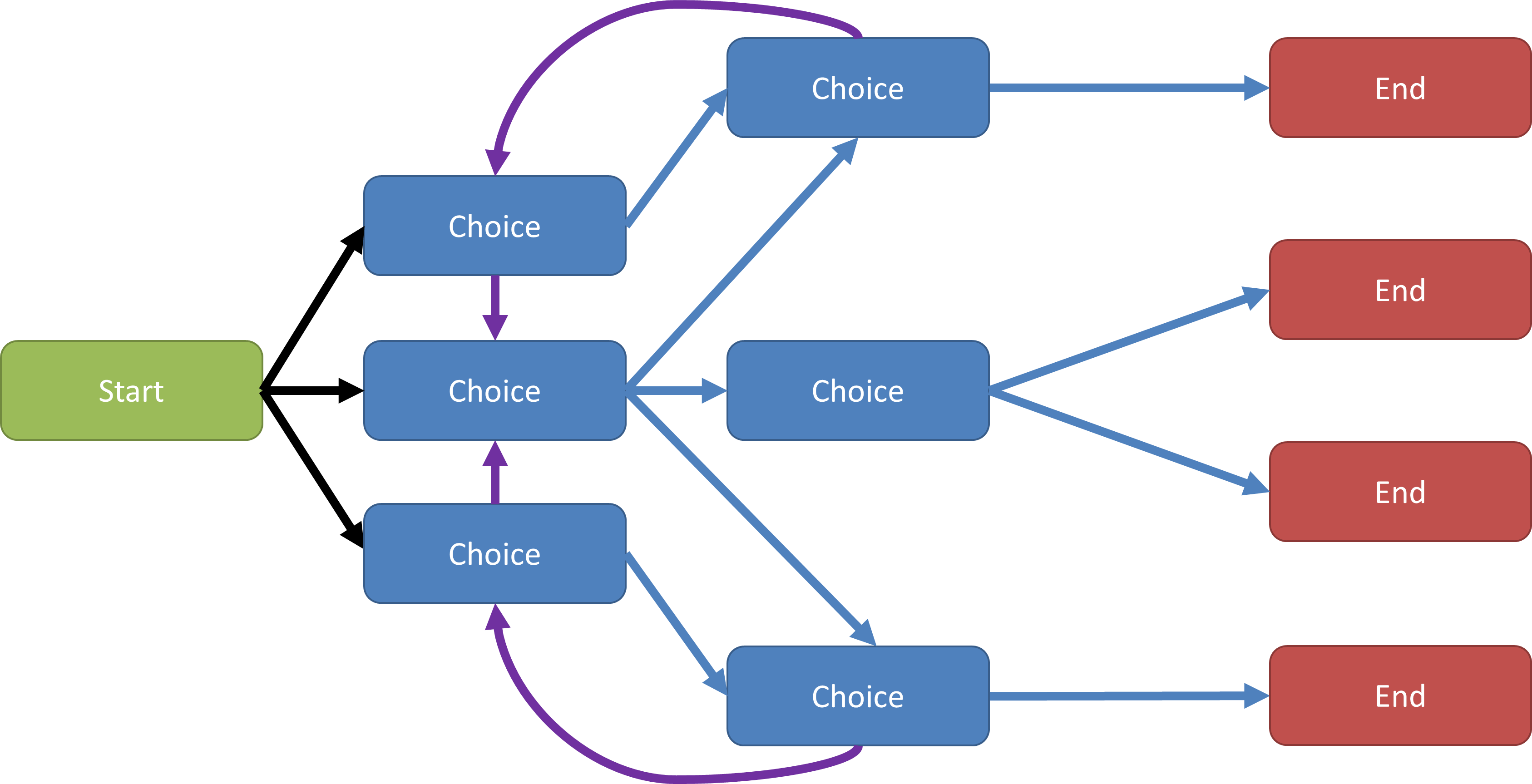 The more I play games, the more I realise just how important having choices that are meaningful, or at least feel meaningful.

One of the key features that separates games from other media is that the player is put at the centre of the story and can interact with it, you are not just “along for the ride” as you are in a film or a book.  When you sit down with a book, you start at the start and then read every page until you get to the end (unless it is a choose your own adventure…). The only choice the reader gets is whether or not to start the book and read it all the way through.

As I have said, games allow you to do more than that for the player. Games allow you to give the player levels of autonomy or agency. A sandbox game, like Minecraft, this is quite simple – they have total freedom as there is no actual end game. There are still choices to be made, but they are unpredictable. How big will my house be, do I dig for gold, do I make a roller coaster. Rather than designing a choice architecture, you really just give the player the tools to support them.

However, games with some form of narrative can be made much more interesting by allowing some level of agency beyond the simple “start at the start and end at the end” idea.

One option that you see is to give players “fake” options or choices. They get the choice to turn left or right at a junction, but really both paths will eventually lead to the same ending. They may experience different things taking the left rather than the right, but the end goal is the same.

This sort of architecture works well on games that are only designed to be played once or where the gameplay is more important than the narrative. An example that comes to mind are older first person shooters. You could choose where to go on some maps or what your path was, but you always ended up in the same place. However, the choice had weight as it altered the tactics you would use each time you ran through the level.

There is nothing wrong with this sort of architecture if you can make the choices feel that they are meaningful and have significance to the game. You can also get very complex, with multiple twists and turns before you come to the inevitable conclusion.

A game that makes good use of this would be Tell Tale’s Walking Dead. Every choice you make alters the way the game will play. Who will live, who will die, how people react to you. However, the conclusion is always just about the same. You may have fewer people left and there may be some strained relationships, but the end of the game is the same each time.

The alternative to the fake choice architecture real choice architecture. Here the players actions have real significance to how the game will play. A simple example would be the player back at the junction. They can go left or right. Either choice in this architecture gives a totally different outcome for the player. The choice they make has real meaning to the rest of the game.

The significance can be less obvious than that of course. If you think about RPG games and how you can interact with non-playable characters (NPCs). Very often the choices you make in your dialog will determine how the NPC will react to you not just in that conversation, but later in the game. A simple choice to be aggressive could turn a whole faction against you, altering the whole balance of the game.  Suddenly seemingly simple interaction become deeply meaningful to the game.

The PS3 game, Heavy Rain, was a great example of this more complex choice architecture. There were many endings that could only be seen if you made specific sets of choices along the way.

In gamification it seems as though the choice architecture is pretty straightforward. You need users to perform certain tasks, for which there will be some sort of reward. However, it doesn’t need to be that simple. You can design the user journey so that they can make choices along the way. The outcome is likely going to need to be the same for each user, but if it is a gamified system, the likelihood is they will only experience it once anyway!  Add things in that are just for fun, but like a video game side mission, are totally optional.

For instance, you can choose to decrypt this if you want – that is up to you. Is there meaning to that choice, only if you like code breaking!

Create simple narratives and stories that are affected by certain decisions, but make them have some effect on the outcome. I remember taking a “gamified” course. At the start you chose your team and along the way you had the option to collect certain items. It seemed great, until the end – at which point it turned out that none of the choices you made had any influence on the outcome at all. All it had to do was unlock a simple message or change the last image, but no – nothing. I have no idea what the course was teaching, all I remember is the outrage I felt at being tricked into doing more than was absolutely essential, because it felt like my choices may have some importance!

And finally, a few videos for you that I have been making. Enjoy!