[October 2018 Update] Another great study has come out from the HCI guys, it can be found here Empirical validation of the Gamification User Types Hexad scale in English and Spanish

Another very misunderstood yet overused metaphor from game design that we use in gamification is Bartle’s Player Types [1]. What follows is an attempt to create something similar to Richard Bartle’s player types, but for gamified systems.

In this model, there are six types of users described (at a basic level). There are four basic intrinsic types; Achiever, Socialiser, Philanthropist and Free Spirit. They are motivated by Relatedness, Autonomy, Mastery and Purpose [2][3][4] – RAMP. The other two types, whose motivations are a little less black and white are Disruptor and Player. The images below show the basics. 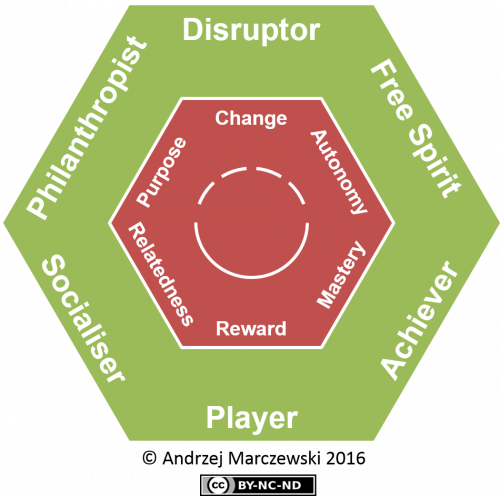 Players are happy to “play” your game, where points and rewards are up for grabs. Disruptors want nothing to do with it and the others need a bit more to keep them interested. This looks a bit like this 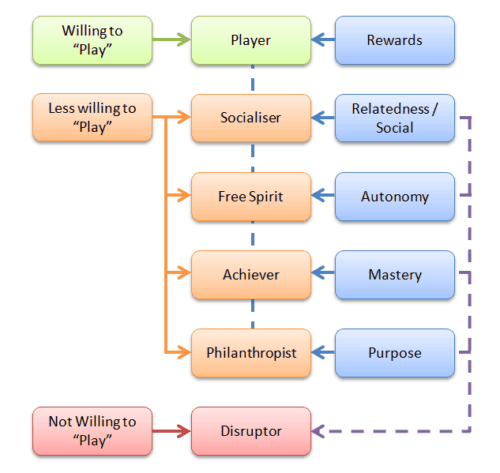 The point of these types is to give gamification designers a simple framework to think about the types of people they may have using their system. It is essential to keep in mind that people can not be broken down into simple categories like this, they will likely display most if not all of these traits in varying degrees. You need to design to encourage the behaviours that will give your system the best outcome, whilst engaging users. These types can help with that.

Essentially the Player is motivated by rewards, plain and simple. They will do similar things to the intrinsically motivated group, but only if there is a reward at the end of it!

The Player User Type is important to recognise as most people coming into a gamified system are probably there initially due to rewards (points, prizes etc). The trick is to try and convert them from being reward oriented into intrinsically motivated users (Socialiser, Free Spirit, Achiever, Philanthropist). There is some evidence to show that the extrinsic types will convert to their analogous intrinsic types (so Networker -> Socialiser etc) but it is not a dead certainty in all cases. Design for the intrinsic user types that benefit your system, but include reward paths for the onboarding process for best effect and greatest coverage.

Disruptors disrupt a system in some way. This may be by acting on users or on the system itself. As with the Player type, the Disruptor type is a group rather than a single type. However, I don’t tend to go into the detail as the effect on your design is generally similar for all the variations of the type. Going into a deep dive, we get these 4 main types of disruptor:

As you can see, the Disruptor can be a complex type and whilst they make up a very small percentage of the overall user group, they can be very powerful. Handled correctly they could help improve your system, handled badly and they may destroy it.

Summary of the User Types

The Dodecad of User Types

All of these different user types have the potential to affect each other in your system. For example, Philanthropists are the parent figure. They are the ones who are likely to want to help anybody they can, no matter of the other person’s motives. Exploiters, on the other hand, will make use of anyone and everything they can to get personal gain from the system. Socialiser and Networkers will wish to interact with people. Neither will be after anything from people directly. In the case of a networker, their reward comes from being connected; whereas the socialiser’s reward is knowing you and interacting with you. Self Seekers have no real interest in the people within a system, they are just a means to an end (that end being the shiny shiny things). In a similar way, Achievers are not there for the people, they are there for self-enrichment. The big difference here is that the Self Seeker is the one who will collect badges and trophies in a system to show off their expertise to others. The Self-Seeker is very similar to the Bartle Achiever player type! Free Spirits and Consumers have the least impact on any of the other users. Their interests are purely personal, using the system to get what they want from it. Other users are of no direct interest to them.

How do you create a balanced system for all types of users?

The answer is, with great difficulty and it depends on the goals of your system. However, if you go back to when we just had five user types, Player and then Philanthropists, Socialisers, Achievers and Free Spirits, it becomes a little clearer. Create a system that appeals to the four basic intrinsic motivations and user types. Make it social, make it meaningful and give people some freedom. Then, integrate a well thought out reward system (points, badges etc.). If you do it this way around, you are not creating a system that relies on the rewards to run. That way, you get the intrinsically motivated people anyway and those that are there for rewards are catered for. It is important to keep in mind that you want more of the intrinsically motivated users if possible. These are the ones who will keep coming back, keep producing content or whatever else they are meant to be doing. Philanthropists and Achievers can both help a system thrive. Philanthropists want to help everyone. They want to answer questions and guide users. Achievers, depending on the type of system, may also wish to do the same. They are interested in being the best – at mastering things. They will want to give the best answer to a question, not so much to help the user, but to know they were the best. However, as their main aim is self-enrichment, they can also give very little back to as system aimed at teaching – which may be just what you want! Free Spirits tend to give very little back to the people if all the system allows them to do is explore. Too many of them and the social aspect of your system stands a good chance of not working. Give them the chance to be creative if you want to get anything back for others. Socialisers are great for evangelising a system and bringing more people to it, however, they don’t add content to systems as much as other types can. Too many and all you have is a social network. Disruptors are generally unavoidable. They want to change the system and will find a way if they can. Make sure you have solid rules that can be enforced. If you don’t want people to do something, make sure they system doesn’t let them do it! Also, keep in mind, disruptors can work as improvers or destroyers – so they are not all bad and may actually help you improve the system! If the system is flooded with Players then you stand the chance of devaluing everything. They run the risk of generating lots of meaningless content, upvoting and liking just for the reward, abusing others in an attempt to network and so on. Keeping them involved in a controlled way can be time consuming and expensive, so look at creating a system that converts them to intrinsically motivated users!

A few final thoughts It is really important to keep in mind, this is all here to help clarify thinking. Real life is not as black and white, users will most likely display traits from multiple user types. But, they will usually have one that guides them more than the others. They are also likely to change user types as they get to know the system. In systems where rewards are used in the onboarding process but are phased out as the user becomes more capable, you will see them going from extrinsically “motivated” user types to intrinsically motivated types. This is when they realise that there is more to be gained from the system than just the points and badges. Finally, why not take the User Type Test and see which of the 6 types you may be?

[3] Pink, D. H. (2009). Drive: The surprising truth about what motivates us. Distribution (p. 256). Canongate. Most of the icons are available at game-icons.net. For more information, check the icons accreditation info here.

The User Types Hexad is free to use in an unmodified state for non-commercial purposes (research, education etc) with attribution. If you wish to use the Hexad or associated content for commercial purposes, all I ask is that you let me know so I can promote the work here! If you are interested in modifying anything here for your own purposes, again please get in touch and we can discuss it.

The concept of the Gamification User Types was born at the end of 2012, with my first official published version going live on the 30th of January 2013. It was with the help of Professor Richard Bartle that they truly went from mere idea to writing it all down here!