In the last chapter, I briefly touched on reward schedules. The most basic way to define reward schedules is that they are a set of rules that define when a reward (or any kind of feedback) is given to the user. I am going to discuss three core types of reward schedule, Random Rewards, Fixed Rewards and Time Dependent. I’m also going to introduce some ideas on how to balance the release of rewards and their perceived value.

These tough to explain, and really hard to implement well! A random reward is one that the user is not expecting and should probably have no reason to expect. For instance, a badge for their forty-second achievement in a system. There is no obvious reason for it but done with a little Hitch Hikers Guide to the Galaxy humour, it may make someone smile at least!

Random rewards are not the same as gambling, I hasten to add. They should not require the user to “bet” or place anything at stake. These are just little surprises from the system to the user or player, to “surprise and delight” them.

Now, the difficulty is working out when to use them. That is up to you, but overuse leads to the surprise element being diluted.

Fixed rewards are given to users based on predefined actions that they complete. Click “Like” 10 times. Complete 10 modules. First activity, level up, beat the boss level etc. As we will see later, these are the cornerstone of reinforcing progression and achievement in a gamified system but need to be well planned to create a balanced experience. Other examples include rewards for daily logins to a system, bonuses for finding secrets (a bit like Easter eggs), certificates for course completion.

Similar to Fixed Regards, but rather than being triggered they are either triggered by a time-based event or limited by time. For instance, a discount code that is only available on a user’s birthday or Halloween would be considered time-dependent.

The flip side would be time-limited events. So, a reward that could only be gained at a specific time of day (Log in a 12 pm to get the reward), or ones that run out after a set time period (Only available for the next 10 hours). It could also be limited by the number of rewards available, for instance, log in now to get one of ten free gifts.

However you apply rewards and feedback, especially fixed rewards, you need to have a plan for what you are giving, why you are giving it, how much it is “virtually” worth and when it is going to be given.

If you think back to the User Journey model I proposed in the last chapter, you will remember that the journey can be split into a few different parts. The ones we are interested in now are OnBoarding, Immersion and Mastery.

So, there is a theory that we talk about in-game and gamification design called Flow Theory1 created by Mihaly Csikszentmihalyi. At a very (very very very) basic level, Flow is a state of optimum engagement and immersion, where the perceived challenge perfectly matches the perceived level of effort. It is a strange experience that feels as though time has no meaning and there is nothing but you and the challenge at hand. Games often achieve this. For our purposes, we are interested in the concept of balancing challenge and skill. If something is too challenging for your current skill level, it becomes frustrating. If it is too easy, you get bored.

No real user journey will be perfectly smooth, no matter how well you design it. From time to time users will feel overwhelmed or bored. Feedback and rewards can help with this, especially early on.

If we think of rewards as tools for reinforcing success, or pats on the back even, then you want to use them to keep the momentum going.

We can layer the User Journey onto Flow, to help us get a picture of how it sits with the concept of Skill vs Challenge. 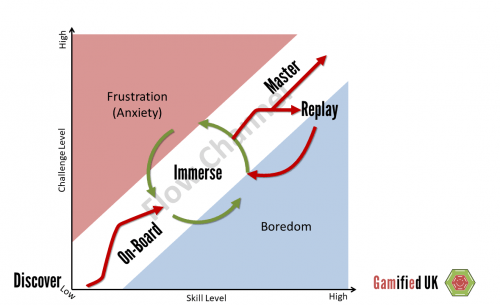 Early on in their journey, users need more reassurance that they are doing the right thing, they are learning. As their journey progresses, they need less encouragement until eventually, they should not require any at all (they either find an intrinsic motivation to continue or are accepting of the importance of continuing.) Think about teaching a child how to ride a bike. You start off very hands-on, helping every step of the way. Frequent congratulations for relatively small achievements, hugs and cuddles when they bash their knee etc. As the child becomes more adept at riding the bike, they may just require verbal reassurance and praise. Every now and then they will start to struggle or get frustrated, so more praise and cuddles are needed. However, eventually, they forget you are even there as they cycle joyously off into the sunset, whooping and laughing, enjoying their new found skills and freedom!

And so it is with gamification and the use of rewards and feedback. During the first stages, the onboarding, people need more feedback, reassurance that they are on the right track and doing the right thing. In an ideal world, they will start to get immersed in the experience and gradually require fewer and fewer rewards. Once they have “mastered” the skills needed, they should require little to no reinforcement. The reward density decreases over time as they learn the required skills. Perhaps the perceived value of the rewards will increase as the perceived effort increases, but the frequency should decrease.

Now, as I have said, not all journey will be smooth, so as things become frustrating for a user, we may need to increase the reward density or value, just to give the user that virtual “cuddle” and reassurance that they are doing fine. The other way to use a reward when a user is frustrated is to make sure it has a high perceived value to the user, to really give them the incentive to push on.

A final, but very important note on rewards and feedback, perceived value. The more effort or personal investment a user has to make, the larger the reward should be. If you are just asking them to tick a box, you don’t need to give them a billion points! However, if you want them to write a 10,000-word essay, maybe a billion points would be nice. Set expectations early on by rewarding low skill and effort activities with small value rewards and increase the value of them as more effort is required. If you get the balance of reward value vs perceived effort wrong, you can confuse the user, frustrate them and just plain insult them!

In my view, this is where many people go wrong (not just in gamification), placing too high a value on things that are really meaningless and then not rewarding meaningful actions. I’m not saying doctors and nurses should be paid more than footballers….