Continuing my investigations into play, I wanted to talk about a few things my kids have been teaching me about just letting go and giving in to the fantasy and the lack of imaginative boundaries that real play demands. It is not as easy as it would first seem either.

There are lots of views of play out there. I offered some of my thoughts in a recent post, that play is a free form activity that is undertaken almost just because it can be and it brings fun and joy. In this sort of description, play is an activity – it follows a similar line of thought to  that proposed by Johan Huizinga in Homo Ludens. It was also Huizinga who gave us the concept of the Magic Circle – the boundary between reality and play.

There are many variations on this idea, most famous probably being Frames from Gregory Bateson (later expanded on by Erving Goffman). This expansion described  a frame as a set of unspoken, implicit rules that surround the fantasy world – refereed to as metacommunication.

Anyway, back to the kids. One of their favourite games is Toca Town. If you have kids and have an Android or Apple device, look for Toca Boca – their games are amazing!

Toca Town is a sandbox game, a playground. It gives you a small vibrant town, with a shop, an apartment, a park and lots more. Each area has things that the player can mess around with. In the shop you can fill your basket with goods, scan them and leave. You can eat things, get toys from the vending machine and so on.

In the apparent you can watch TV, type on the laptop, use the toilet and anything else you can think of really. There are also lots and lots of secrets to find. You can combine foods to make meals, cook marshmallows on the camp fire and so much more – it makes my head spin.

For most adults, this does not really sound all that fun. When I tried it, I just didn’t see the point. I had no goals or rules to follow. The characters did nothing by themselves and whilst it was fun to find some of the secrets, it just didn’t click. Then my daughters showed me how to play with it!

You see, I was looking for a game and this isn’t a game. It is frame for play, a playground that is filled with toys. Whilst at an intellectual level I understood this, what I was missing was the imagination to create the next key part of playing in this sort of environment. I was not creating my own narrative or story. They went in and set up a scene in the shop. One of the characters was buying lots of stuff to make a meal for their friends. Once they had left the shop, they decided that it would be more fun to have a picnic, so the story changed to a trip to the park and later the beach. The characters in the story were having so much fun, they decided to camp for the night and go swimming by moon light.

This was a revelation to me, which is in itself a little sad. I understood that play was this free form activity that was not restricted by extrinsic rules and goals – but that was more what it wasn’t.

What it was for them in Toca Town was a way to create a story that they could control. An ever changing and dynamic narrative that had just one boundary – their imagination. The strange thing for was that I have issue with the idea of creating dynamic narratives and playing in that space.

One of my favourite activities to do with the kids is play with Rory’s Story Cubes (I can’t recommend these enough!). These are a set of dice that have a series of icons on them. You role the dice and then try to make a story out of the icons. Each icon has different meanings to everyone who plays them and can be used literally or symbolically in the story. The difference here is that I knew I had to make a story – so I had a parameter and a goal. It sits around what I would call gameful play – it is play, but has some level of game to it (ie the defined goal).

Whilst I was writing this, Toca Boca had one more wonderful lesson for me about playfulness. This was playfulness applied to their website, an element added for no other reason than because it can be added and may provide entertainment or joy to people. Lots of websites now have a big up icon at the bottom of the page that takes you back to the top. Not Toca Boca. Get to the bottom of the page and a big yellow balloon appears. Click it and it floats you back to the top before vanishing. Because – fun!

Oh and because this is me – here is a little diagram to try and explain the relationships of play, games, toys and playgrounds!! 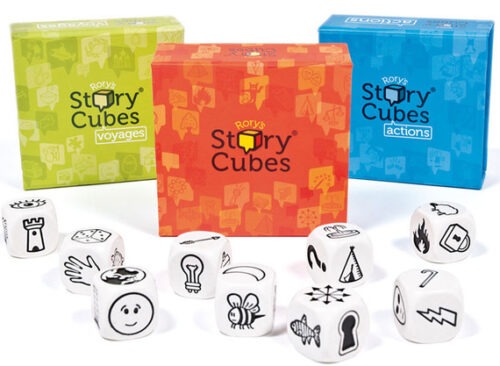 1 thought on “Learning about playfulness from Toca Boca”