If you follow me on Twitter, it is unlikely that you will have missed the fact that I love a toy called Rory’s Story Cubes.

For those who don’t know, Story Cubes are sets of dice with unique icons on each face. The basic idea is to roll a set of 9 dice (made up from the various core packs and expansion packs) and then use the sequence of icons to create a story. It can be played alone or as a group and to be honest it is absolutely wonderful!

Fun and story telling is where the crux of this blog is heading. I recently tweeted a photograph of me playing with the Story Cubes on a map I had printed for my eldest daughter. You see, at our house there has been something of a television ban. There have been some moments of extreme lack of imagination and willingness to play, because T.V. is easier and less effort!

We had played with Story Cubes in the past, but at times my eldest (7) can be a little literal. She would see a foot and that was all it was. So I decided to try and help by giving the story a bit of a setting and a theme with a map. Actually the map is from Kingdom Rush and I just added a hexagonal grid onto it.

Rather than just rolling the dice and making up a story, the dice are rolled onto the map and the initial story is set up based on where the dice fall and what icons are showing. Starting from the left most icon, once person begins with “Once upon a time” and something related to the first icon. The next player chooses a dice that is close to the first one and so on. Usually one cube becomes the hero and one a bad guy. As the story evolves, dice that have been used can be re-rolled to create new story objects, incidental characters, spells, quest icons and so on.

The reason my daughter likes this is because the story flows and becomes much more game-like, almost becoming an RPG. I like it because for at least 20 minutes she is happy with the T.V. off!

If you want to try this for yourself, here is a PDF of the map I use, but you can always just drawn one with the kids (or the grown ups!!).

I would love to see what you all come up with in the comments, share your maps, your rule ideas and new ways you play! 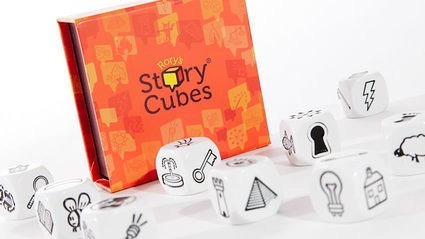 8 thoughts on “Unleash your creativity with Story Cubes”