When I was researching my definition of gamification, I had a few major dilemmas. One of the main ones was the use of Game-Like over Play-Like.

Just as a reminder, I define gamification in the following way:

However, it was very nearly:

I have spent time previously explaining how I see the differences between play and games, you can read loads more here. At it’s most basic, the difference revolves around rules and goals. Games have extrinsically imposed rules and goals, where play doesn’t (or, at least, has far less). It is free form in its nature and from the outside looks like it has no purpose (but of course it does!). 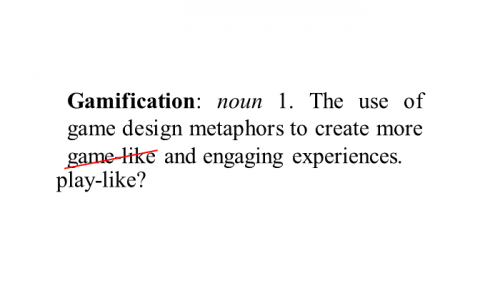 A lot of things in life are very game-like in nature, especially work. There are strict rules about how tasks have to be completed. Completion of tasks and compliance with rules is rewarded (you get paid), breaking these rules leads to negative consequences (reprimands, warnings, getting fired).

What we don’t see very often is the more play-like side of games being included in real world tasks like work. The lack of structure, the freedom to experiment and more importantly, to fail, are all missing.

Very often what we are doing in gamification is trying to inject some more play into these types of system. Elements that are fun just because they are fun, simulated environments to allow failure and learning in safe environments, more freedom to experiment and innovate etc. Of course on top of that, we are adding elements that make things feel a bit more like a game. Adding new purpose, rapid feedback, increased interactivity, concentrating on flow and more.

So, I chose to go with game-like for a couple of reasons. First and foremost, it is easier for others to understand what I am talking about. Play-like requires a lot more explanation, the concept is much harder for people to understand. Also, whilst work and similar activities are already slightly game-like, the could all do with being more game-like!

Whatever you are doing though, don’t forget the play! 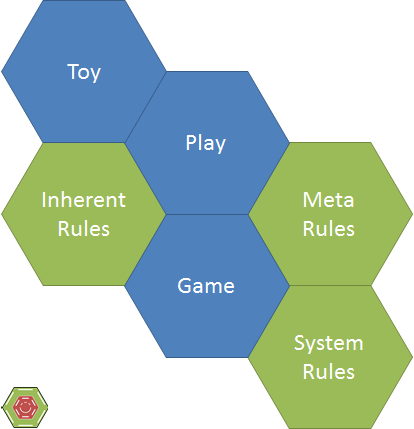