Home » Gamification » The Effect of Time on Decision Making

I am fascinated with decision making and why people make certain decisions. There are loads of great papers out there, some of which I actually understand!

What has really caught my attention is the effect of time constraints on decision making.

We see this a lot in games, sometimes obvious other times, not so obvious. It is also used to varying degrees.
For example. The Walking Dead uses this to great effect during certain conversations. The game asks you to make a decision then given a few choices. Whilst you decide there is a progress meter counting down that will force neutral and probably unwanted response if you don’t choose. Within the context of the game, this forces you to often go with gut instinct over long considered decisions. This gives the feeling of drama and in some cases real dread, with all choices often seeming negative – leaving you to choose which is least bad.
In Mario, there is always a timer ticking away at the top of the screen. For the most part, this does not really mean much as it has ample time to complete a map – or so it seems. Yet, after deciding to collect everything on a level, you often find time running out and suddenly it all feels more desperate as you sprint to the finish line!
These are obvious examples of time pressure on decision making, you can see a timer and know it will run out at a certain point. Games offer many other types of time constraints, from how you react to people shootin at you, to how you are going to get from one side of a map to the other as you are being chased. These kinds of pressures force fast thinking, reflex action and definitely don’t encourage considered or creative solutions. But, these kinds of moments often feel more “real” and emotional, they have more meaning in that split second.
Some people use this to get “gut reaction” decisions in the context of workshops and the like. A popular “game” is 3-12-3 or variations of it. A problem is set and groups of people are set the challenge of solving it. There are then three phases of the brainstorming process, all tightly timed. The first lasts 3 minutes and is used to come up with some ideas. Keeping the initial time tight forces participants to not over think the problem. Next, they have 12 minutes to develop a more concrete idea from the ones pooled in the first phase. Finally, the groups have 3 minutes to present their idea to the other groups. Rules differ, with individuals and pairs and groups doing various things, but the key principle is always the same. The initial idea generation phase has a short time limit. But why would this produce better ideas?

Decision Field Theory – How We Decide

As I say, there is a lot of research on how we make decisions. The most predominant that I found was a piece called Decision Field Theory published by Jerome R. Busemeyer and James T. Townsend in 1993 [1]. In this paper, they discuss how people make decisions, based on available information and time etc. Basically, given a set of choices, your mind filters through all of the information available. Over time the probability of each choice “winning” changes until either time runs out or there is only one choice left in mind. The key thing for me considering time pressure on decision making is that changing the amount of time given for a decision to be made, can dramatically change the outcome.

Consider the graph below. The last vertical line (no time pressure) shows a decision that has been given its natural length of time to complete, in this case about 2 seconds. Here Choice A is the obvious winner. However, if the time is cut in half, you can see that at 1 second Choice C would win.

This, of course, does not tell us if choice A was better or worse than Choice C. The difference is that Choice A is a more considered choice. In fact, it may well be wrong, as the information you had when Choice C was winning may have been more accurate than the information you had at Choice A. You may have talked yourself out of Choice C based on some kind of personal bias you were not aware of. All sorts of things change the validity of each choice. Going back to our brainstorming game, in reality, the shorter time is given for idea generation probably doesn’t yield better ideas. What it does is give you a chance to generate more ideas without any of your natural bias’ kicking in, rather than ideas that are definitely better! After that, you have time to be a little more considered and creative.

So time is a factor in what decisions you make. Another interesting part of decision making to consider is how we perceive things. In 1998 Yaacov Trope and Nira Liberman published a paper called Temporal Construal Theory, which eventually became part of Construal Level Theory of Psychological Distance (CLT) (2010) [2]. This theory proposed that people thought about things differently based on the psychological distance between them and the thing. This could be physical distance, temporal (time), social etc. The further the experience is away from the object, the more abstract/high the level of construal or perception is. The closer the object is to the experience the more concrete/low level the construal is. This is the difference between considering WHY a thing needs to be done and HOW it is going to be done.

In his paper, Not to be Misconstrued, Nicolas Matthews gives a nice example of this. Consider locking a door. If the event of locking the door is in the future, you may think of it in terms of securing the house. This would be WHY you lock the door. When you are actually stood at the door with a key, you are more likely to think of HOW you lock the door as you are in the moment. Put the key in the door, turn the key, check the door. The closer to the event you are, the more concrete and real it becomes. You no longer have the luxury to think about why you need to do something; you have to think about how you will do it.

When given a task with unlimited (or at least ample) time, you have the luxury of considering the abstract thoughts of why. You can eliminate choices and come up with new ones and iterate old ones. The closer you are to the point the decision has to be made, the more focused you become on how you are going to achieve the given task.

A little example. You have a wall in front of you and are asked to go over it. To your side, you have rope, a ladder, and a hook. Given no time limit, there are a few ways you could do this. You could run and jump at the wall and try to climb over. You could create a grappling hook and use that to climb over. Finally, you could just put the ladder against it and climb up that. Given those choices, and based on factors such as your own abilities, bias’, height of the wall etc, you may decide to use the ladder. Someone else may create a grappling hook, even though it is not the most practical, it may be more fun. As you are further away in time from the task, you can think of the abstract solutions.

Now imagine that you are being chased towards the wall by a pack of dogs. Rather than taking two minutes to make a choice, you have to make it before you get to the wall in 30 seconds. Suddenly you have no time for abstracts, this is the here and now. At this point, jumping the wall seems like the best and most practical solution for getting over it quickly.

If the dogs were to go in a different direction before you get to the wall, other ideas would begin to become better options for you.

Time is an important factor in decision making, one we can’t forget about when designing any kind of system. With gamification as in games, we have the ability to use it to our advantage by imposing time constraints on systems that would otherwise not have them.

By giving shorter time limits to achieve tasks, we limit the number of options that can be considered by people, but by doing so may promote the most practical options to rise to the top. Forcing people into the here and now will make those decisions feel more concrete and real, giving them more immediate meaning.

Use time to your advantage based on the outcomes you desire. If you want to encourage lots of good practical ideas, reduce the time given. If you want to promote creative and more abstract thoughts, give them longer! 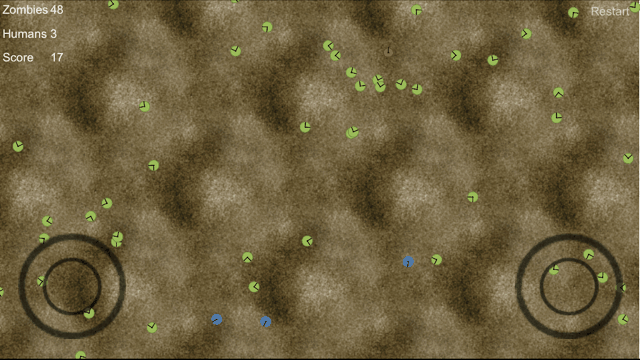 21 thoughts on “The Effect of Time on Decision Making”