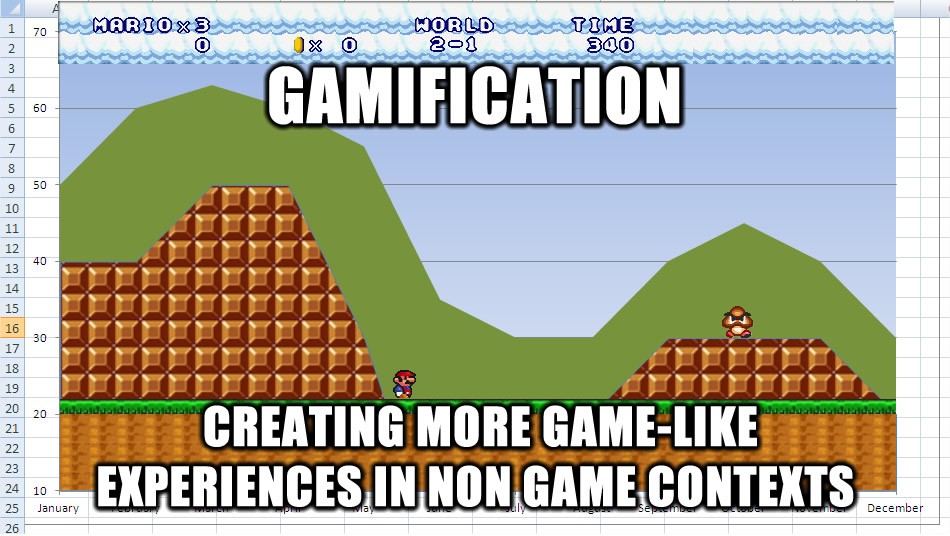 As many of you know, I recently took exception to a particular definition of gamification that was doing the rounds. However, the positive effect was to make me think about what it really means and also started to make me wonder what other people think of it.  So, I asked them – I did a little research…

The results were interesting. I gathered 30 different definitions, some from industry experts and others from people with an interest.  They are all listed at the end, but I thought I would share a few thoughts from them.

I love that so many made mention of “people” or “users / players”, showing that we agree that gamification is a people centric way of designing engaging experiences. Fun came up quite a lot as well!

Here is a quick breakdown of the most common concepts that came up. I have normalised the wording (so mentions of users became people, objectives became goals etc.)

I have a more detailed breakdown after the definitions.

Anyway, I thought I would create a simple definition that encapsulates this. I went through many iterations and discussed with other experts and friends and came up with this.

This is very simple and does not include anything about why or how, just what it is.

I could have gone for “The user focused application of game elements, game mechanics, game design or game thinking in non game contexts to engage, motivate, change behaviour, solve problems, make goals more achievable, make tasks more playful or add fun” but that does not seem to roll off the tongue as well.

The point is, we are all looking at this in pretty much the same way. We are all trying to make more engaging experiences for people using ideas that games have been using forever. We may all define it a little differently, but that is just semantics. Platforms and techniques may differ, but the goal is the same.

Anyway, here are the definitions and the names of the contributors.Thank you to everyone who contributed!

The use of strategic elements of game thinking, game-design and game mechanics for use on non-game environments such as business, education, healthcare, not-for-profit and government applications.

The use of game attributes to drive game-like player behavior in a non-game context with predictability. Where game attributes may be anything that a game-designer use to make a game fun and engaging. For example: game mechanics, game dynamics, game-design principles, gaming psychology, player journey, narratives, incentives, etc.

it is the use of game-design and game psychology in non-game settings to engage the target audience and motivate specific behaviors.

The use of game mechanics to increase engagement and use of websites and applications.

Gamification is the use of game design thinking in non-game environments to engage people.

the use of game elements and design metaphors to solve problems

the use of game mechanics, dynamics, and frameworks to promote desired behaviors

a fun way to do things that have to be done

Using game elements to engage & influence people at a level that motivates them to give you a desired outcome.

gamification: the use of game concepts in a non-game environment to solve problems and also to make the experience funnier

the application of game concepts to a traditional idea or setting

Applying game mechanics to processes not normally thought of as games

Break down of common words