Home » Gamification » Pokemon Go: The Good, The Bad and Some Lessons

Writing about Pokemon Go is almost as popular as actually playing it, so I thought I would join in the trend.

TL:TR It’s great fun but needs to have some careful consideration around safety concerns

In case you have been living under a rock for the past couple of weeks, let me just set the scene. Pokemon Go is a game based on the popular Pokemon franchise. It sees players using their mobile phones to hunt down and capture Pokemon in the real world. Using Augmented Reality (AR), Pokemon pop up all over the real world for players to capture and train. Once caught, they can be leveled up, evolved, battled with at Pokemon Gyms and more.

The game is made by Niantic with Nintendo and a few other companies. Niantic and Google laid the way with their game Ingress, which had a similar concept – use your phone to play the game in the real world. In fact, the portals that players set up in Ingress have been almost mirrored like for like into Pokemon Go, but more on that later.

A Quick Analysis of what makes it so engaging

Looking at the core mechanics of the game, we can see that it hits a lot of key user types at once, making it a game that attracts and engages many people. It may look heavily weighted towards players (which is natural) but actually look at the balance in the numbers! Done with the HEXAD Application Analysis Tool.

It turns out, people really like to explore if that exploration leads to finding interesting things. They also love the whole idea of scarcity. One of the key engagement hooks in Pokemon Go is the phrase “Gotta Catch ‘em All”, but with so many to catch and with there being the very variable availability of them, people are driven to go out of their way to find them. In gamification, we can do this by making certain awards only available to those who really go out of their way to get them.

Also, the virality of the game is a great example of the “Fear of Missing Out”. This is the phenomenon where people do something because they are afraid that others are having a better experience than them in some way. This is powerful, but also dangerous in near equal measure. As you will see later in this article, this FoMO effect can drive people to do rather insane things to avoid it.

If you can, use as many mechanics and elements as possible to engage as many players as possible!! That seems obvious, but can be very hard to do.

Use the real world, don’t rely on technology to do all of the heavy lifting.

One of the great things about this game is that it forces you to leave the house. You can’t get far and certainly, won’t “Catch them all” from your sofa. This has led to some wonderful spontaneous group meetups.  Even in my village, I have witnessed small groups of people of all ages stood outside the Library, which is a Pokestop in the game. A player had placed a lure at the stop, which attracts Pokemon to the area and other players had all come along to enjoy the wealth of Pokemon to catch. The scene was one that went from nervous recognition to laughter and joy as they all shared information about the game and good spots in the area.

There have been wonderful reports of people using their lures to attract Pokemon to children’s hospitals to allow bedridden kids to play the game, though that has caused its own issues!

Small industries have popped up offering tours of towns to get players to the best Pokemon stops. I saw a great story where a little girl has set up a snack stand outside her house once she found it was a Pokestop! Small shops have also been benefiting from the same thing, dropping lures outside their shop to encourage people to the area. Once there, they often go in and spend some money!

There have been people who have said that the game has helped them get over anxiety as they leave their house to play.

My kids and I have been having great fun going on Pokemon hunts together.

As with all things, and because as a species we just are not allowed to have nice things, there is a darker side to all of this. One Twitter user has been campaigning hard to make gamification experts consider this more deeply.

Incidents include a driver who crashed their car whilst playing Pokemon Go as they drove, another who went into a police car as they played (!?), a woman who broke her foot falling down a ditch, a girl who was run over whilst playing as she crossed a road and more.

More sinister is that people have been using Pokestops to lure people into muggings.

The worst incident reported to date is that of an 18-year-old being shot dead as they broke into a house to catch a Pokemon.

There are other issues that are coming about as well. For instance, my daughter’s nursery is a Pokemon Gym. Suddenly the teachers found people with cameraphones all around the nursery. What is to say that all of them were really Pokemon Go players and not perverts looking to get pictures of kids?

The NSPCC has already condemned the makers of the game for ignoring the safety of children.

For the more conspiracy-minded of us, there is also the big business angle. This game is going to make people a lot of money. Almost overnight, Nintendo become worth more than Sony! It has also just been announced that Japan will see all of it’s McDonalds become sponsored Pokestops. Some could say that the developers may be putting profit before people…

There has been a question about the ethics of Pokemon Go, even my own Open Ethics has been cited in the argument. At this moment, I am struggling with this. I don’t personally think the designers of the game have deliberately set out to do anything bad, but have potentially not considered the impact of the game in enough depth. There is also this phrase under Integrity “Gamification should not be used to manipulate children for commercial purposes.” that has concerned me. Making money is fine, I have no issue with that. But this does seem to be one of the largest scale incidents of using children to encourage money making that I have seen in a while. The game itself not so much, the in-app purchases are well done, more from the angle of luring them to McDonalds or other shops. Again, the intent is not malicious, but it is worth taking a bit of time to consider the ethics and morality of it all!

The problem is, this is new territory. For instance, are there any laws that state a virtual entity can trespass on your property. That is to say; if a Pokemon appears on your property in the game, is there a legal precedent, a question asked by many including Associates Mind. I am yet to find a way to request that certain areas are Pokemon free for instance.

Now many, myself included, will be yelling “How is it a games fault if people are dumb?” The game seems to be lowering some people’s ability to use common sense. P;laying whilst driving? Not looking as you cross the road? The first thing you see when you load up the game is a message telling you to be aware of your surroundings.

But, it is not quite as simple as that. The game, as I have already shown, hits a lot of key areas of motivation for players. As gamification designers (and of course game designers), we aim to get players “in the zone”. This is the place where the player becomes so immersed that they forget about the real world. Gamification experts often talk about “Flow” in the same way. Immersion relies on many things, but one of them is familiar surroundings, places where people feel comfortable. What is more familiar than the real world?

Whilst all of the main Gyms and Pokestops were added by real people whilst playing Ingress, the volume of players in Pokemon is greatly different, so there are new issues that could not have been considered by those early pioneers! One bit of advice is that if you have a pokestop or gym on your property and don’t want it there – use this form to request it is removed!  https://support.pokemongo.nianticlabs.com/hc/en-us/requests/new?ticket_form_id=341148

Personally, I feel that Pokemon Go represents more good opportunities than bad.  Anything, where players get out of the house and enjoy the real world with other people, has to be a good thing.  I am sure there are great opportunities for rehabilitation and therapy, family time, real life social networks for those who are not of the pub going nature, and much much more. This is just the beginning. I for one am looking forward many Pokemon hunts with the kids this summer!

There are so many things we can learn from it in gamification as well!

However, the bad does need more consideration. It needs to be easier to understand what can and can’t be done with virtual and augmented worlds. Laws that are custom built for this need to be made, not old laws retrofitted for new purposes they could never have possibly been intended for.

People need to exercise a little more common sense, but they need to be promoted by the games to do so. The games developers need to have a greater awareness of the power of the game over people and include regular warnings, to break people out of their gaming stupour.

This is a new era in gaming and we need to make sure that we enter it in a safe and sensible way.

My advice. Enjoy the game, remember it is just a game, stay safe and look up from your phone as much as possible. Also, you only need to be within about 40 meters to interact with the game entities – you don’t need to trespass! 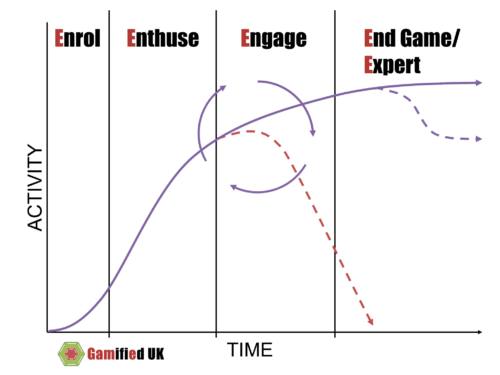 4 thoughts on “Pokemon Go: The Good, The Bad and Some Lessons”

£11.99 Gamification Bundle: Even Ninja Monkeys eBook, Gamification and Solution Design Lenses, Inspiration Cards and Design Toolkit Note: this is a download only, there are no physical copies being sent.…
£11.99 x 1
This is where the Express Checkout Button will show. View it on the front-end to see how it will look to your visitors