So, Christmas is done and we are now in that no mans land between Christmas and New Year. No one knows what day it is, what they should be doing or what their next meal might consist of – but know that it is in the freezer and is bit sized.

The next week or so can be really hard to stay focused during as you work in a piecemeal fashion and have slightly less direction than usual. So I thought it was time to just share the basic prioritisation framework I use in my head (which I probably stole from somewhere!). At it’s most simple it asks the question

There are factors that can affect the priority as well, moving things more to being a now thing or towards being a later thing.

Here is a simple example of how you could consider this, a decision tree that asks a few questions to decide if it is a Now or Later Thing 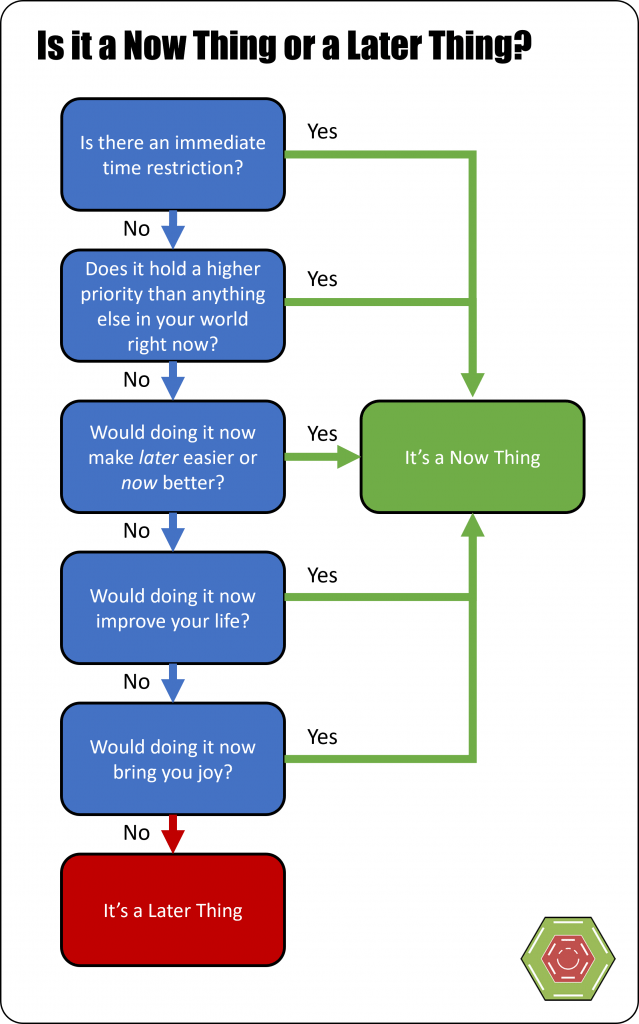 This is a massive over simplification, but it serves as a simple example – not many things actually fall into the Later Thing category! However, it is important to go through a process like this to help decide if you should be doing a thing now or later. So, a client calls and their entire network is down and they are losing billions of dollars a second whilst they wait for you to fix it. That probably sits in the realms of a Now Thing, when you are sat trying to decide if that is more important than playing the latest video game you got for Christmas – or do client work!

A little less obvious, you have this new video game and there is no client work. However, you do have some training that could be done that will make later easier and possible improve your life by learning a new skill. The video game still sits in the Later Thing category.

You’ve done your training, there is no client work to be done and no other priorities you can think of that will impact you if they are left until later…. the video game is going to bring you joy and help reset your brain – it is finally a Now Thing!

As I say, it is a simplification of the process, you still need to prioritise other work and schedule correctly. I am a fan of the Eisenhower Matrix for this. I have used an image from Techtello here to show you an example – it is very very handy as a way to augment the Now or Later framework!

Anyway, I hope this helps a little and gets you back in the swing of things before the New Year!