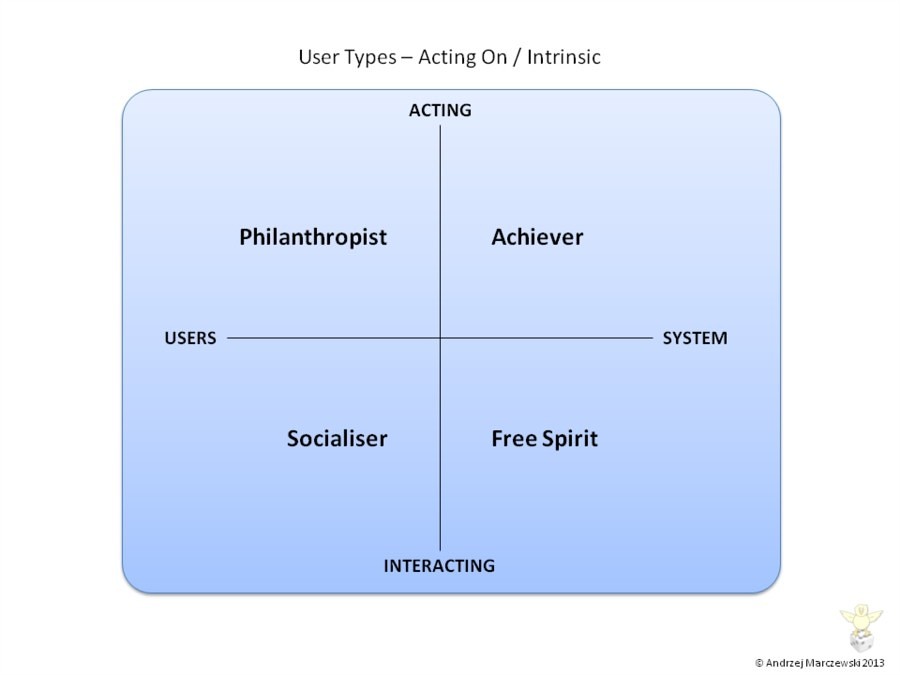 This is here for interest only now – User Types 2.0 is where it is a now!!

Last week I started to explore my ideas about the different types of users there are likely to be in a gamified system. I have had loads of feedback, mostly very positive. Thanks for that. One question that keeps coming up is “what about the Player user type”? “There must be more too it!”. The answer is, of course, yes. There is a lot more.

What I explored last week was really just the intrinsically motivated types of users. Those doing things for purely self related reasons. Helping others, because it makes them feel good. Learning because they want to and enjoy the experience. Creating content that they feel will add to the greater meaning of a system.

The player type of user was there to describe the idea that there are those for whom the intrinsic value of an activity is far less important than the reward that they can get from doing the activity.

What’s in a word?

In theory, you could settle for calling them; Player Achiever, Player Socialiser, Player Free Spirit and Player Philanthropists – believe me, I wish I had! However, as with all good systems, it helps to have names you can visualise and connect with behaviours. So, I propose the following. Oh and I can’t stress enough – this is not a theory, this is a categorisation. It is also not the same as Bartle’s Player Types, because we are not looking at real games.

As you can see, within the Player User types there may well be some cross over of motivation. Consumers and Exploiters may share many of the same traits. The difference is, exploiters will try to find the boundaries of the system and how that may benefit them – consumers just want to get their reward with as little action from them as possible.

All of these different user types have the potential to affect each other in your system.

For example, Philanthropists are the parent figure. They are the ones who are likely to want to help anybody they can, no matter of the other persons motives. Exploiters, on the other hand, will make use of anyone and everything they can to get personal gain from the system.

Socialiser and Networkers will wish to interact with anyone. Neither will be after anything from people directly. In the case of a networker, their reward comes from being connected, where as the socialiser’s reward is knowing you and interacting with you.

Self Seekers have no real interest in in the people within a system, they are just a means to an end (that end being the shiny shiny things). In a similar way, Achievers are not there for the people, they are there for self enrichment. The big difference here is that the Self Seeker is the one who will collect badges and trophies in a system to show off their expertise to others. The Self Seeker is very similar to the Bartle Achiever player type!

Free Spirits and Consumers have the least impact on any of the other users. Their interests are purely personal, using the system to get what they want from it. Other users are of no direct interest to them.

Putting it together visually

I could call this, making a pretty picture that looks like Bartle’s full 8 Player Type model!

All of this can be represented in a sort of ‘3D’ / TriDimensional version of our two Acting On diagrams from earlier.

How do you create a balanced system for all types of users?

The answer is, with great difficulty and it depends on the goals of your system. However, if you go back to when we just had five user types, Player and then Philanthropists, Socialisers, Achievers and Free Spirits, it becomes a little clearer.

Create a system that appeals to the four basic intrinsic motivations and user types. Make it social, make it meaningful and give people some freedom. Then, integrate a well thought out reward system (points, badges etc.). If you do it this way around, you are not creating a system that relies on the rewards to run. That way, you get the intrinsically motivated people anyway and those that are there for rewards are catered for.

Next, looking a little deeper, the eight types of users can help us decide how to balance the system. It is important to keep in mind that you want more of the intrinsically motivated users if possible. These are the ones who will keep coming back, keep producing content or whatever else they are meant to be doing.

If the system is flooded with Self Seekers and Exploiters then you stand the chance of devaluing everything. Self Seekers run the risk of generating lots of meaningless content whilst exploiters will reduce the value of things like upvotes and likes if the rewards are badly implemented.

Philanthropists and Achievers can both help a system thrive. Philanthropists want to help everyone. They want to answer questions and guide users. Achievers, depending on the type of system, may also wish to do the same. They are interested in being the best – at mastering things. They will want to give the best answer to a question, not so much to help the user, but to know they were the best. However, as their main aim is self-enrichment, they can also give very little back to as system aimed at teaching – which may be just what you want!

Free Spirits and Consumers tend to give very little back to the people, consumers especially. Too many of either of them and the social aspect of your system stands a good chance of not working. It is possible that consumers are all you want (with a loyalty scheme), but it is worth considering you can get greater value from engaging everyone else.

Socialisers are great for evangelising a system and bringing more people too it, however, they don’t add content to systems as much as other types. Networkers are similar, whatever their motivations may be. However, networkers will bring in anyone, not just relevant people. Too many of them and the social aspect of the system can become diluted. Look at users on twitter with 30,000 “friends” then look at what content these friends actually generate. The likelihood is that of these 30,000 people, they only interact with a tiny fraction – so will other users.

Also (to satisfy a question I have had), exploiters are the most likely to “cheat”. Now, cheating is different things to different people. In this case, I mean they are the ones who will “exploit” loopholes in the rules to gain – even if it is at the expense of others within the system.

It is really important to keep in mind, these are all just and seconded to help clarify thinking. Real life is not as black an white, users will most likely display traits from multiple user types. But, they will usually have one that guides them more than the others.

Thanks for all the feedback and I hope I get loads more. This is not a finished product in my mind and I will probably revisit it in the future. I hope you find it of use and that it makes defining your systems a little easier.

Why not take the User Type Test and see which of the 4 basic types you may be?

12 thoughts on “User Types in Gamification – Part 2: Players and Balance”