One of the things that I noticed at gamification world congress this year, was a few people mentioning Flow in their talks. As most of my readers know by now, I love the idea of Flow, not just as a pure idea of “in the moment balance and being in the zone” but as a guide to how we should design experiences. The logic of keeping the difficulty of challenges in line with the users relative skill is faultless in my mind.

In game design and gamification design we are also used to the idea that you “zig-zag” the users skill with the challenge levels to keep users engaged and in the Flow “zone”.

I was thinking about how games tend to work and how that fits in with Flow – this is embryonic stuff, so bear with me.

In this phase or cycle, there is an extra level of challenge in the form of a test. Mastering the current level of challenge leads to a display of skill against a higher challenge. In a game you would see this as a boss battle. The player takes all they have learned and collected through grinding and applies it in a single much harder challenge. Usually this will see a large spike in challenge, but the reward for success would be greater!

After a while, grinding is not enough to engage or entertain the highly skilled users, so one tactic is to keep the Boss Battles coming. Rather than resetting constantly to relative low skill / low challenge grinding, keep levelling, mastering and then testing the user. Eventually this will cease to be entertaining though, they will out skill the system – then they can be considered the master of the whole system!

If we take all of these cycles and apply them to our original Flow chart, we can see that each of these cycles can be repeated multiple times as the relative skill of the user increases. Flow is maintained by this repetition. 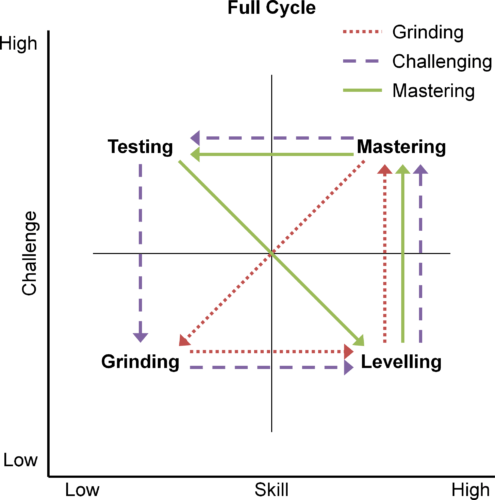 The key is to keep the user out of the Boredom and Frustration areas as much as possible – but not be afraid to put them there from time to time. Grinding -> levelling can lead to boredom you never give them anything to master. Continuously testing a user without allowing them to level up would lead to being constantly frustrated.

2 thoughts on “Grinding to Mastery and Flow”