Home » Just for Fun » Broken Brain and Some Poems

So, here it is. Writing and publishing the book have broken my brain a little! I am working on two blogs at the moment though. One about publishing a book for under £50 ($80) and the other about dark personalities and disruptors!

However, anyone who has been reading for a while will know that when my Gamification brain breaks, I pursue other creative outlets.  There were the Batman Breaks, the short stories and the memes.

Well now I have been writing some poems for my children! Yep, you heard that right! You can find them all on Wattpad – Poems for Children

There is a serious gamification point here. Gamification can be used as nothing more than a temporary distraction to reset the brain – keep that in mind!

Below is an example, if it interests you , called Terry the Tortoise (the image header image will make sense after this!)

Terry the Tortoise was a friendly fellow, kind and ever so wise.
A huge gentle giant, with a wrinkly face, he was one hundred and five!
But there was something strange, you might not expect, about this grand old gent,
There on his back, instead of a shell, was a bright berry red tent!

You see, when he was young, he was far less wise, but still just as kind.
And one fateful day he met a cunning old fox, with mischief on his mind.
He told young Terry a terrible tale, one filled with sorrow and fright,
His home had been flooded, his family lost, and he had nowhere to stay for the night.

The kindly young tortoise listened intently, tears filling his eyes,
He took off his shell and gave it to fox, who faked grateful surprise.
The fox slept cosy and warm in the shell, whilst Terry slept nude on the ground,
But when he woke up in the morning, the fox could no longer be found

Cold, sad, scared and frustrated, for days and days he cried.
Until one morning along came a lady, a fox skin bag by her side.
You poor old creature, what a terrible thing, a tortoise with no shell,
I’ve got an idea, one you will love, to keep you safe and well.

She hurried away, but not for long, and when she came running back,
In one hand she carried some food and some water, in the other a large brown sack.
She gave him the food and poured out some water, she really was heaven sent.
Then she emptied the sack and there on the floor lay a big red tent.

She unfolded the canvas and placed it on Terry, cutting six big holes.
In went his head, his tail and his legs, then she fetched some thin black poles.
In no time at all she was happy and finished, she stepped back to admire Terry.
A grand looking tortoise, a tent on his back; big, bright and red as a berry. 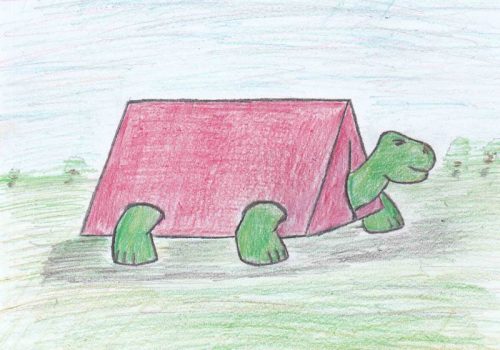