During lockdown and thanks to our newish dog, I’ve been playing a lot of Xbox in the early mornings. I try to play games when I can, but until recently have not really had time to invest much of my life into them. But, I’ve always maintained that to understand what makes games work, you need to play them!

Anyway, I decided to have my annual play through of Final Fight, one of the greatest games of all time (I’m my opinion anyway!). As I was playing, I was analysing what was making it enjoyable (the curse of a gamification designer) and realised one small but key element. The health bars of the bad guys. Rather than just the main boss fights having a health bars every baddie has one, no matter how weak. Read More ...

Ludic, or playful design, involves designing products or experiences through the lens of play. How do you make people feel safe to explore, encourage experimentation and even add some fun?

A while back I introduced my Play Framework, so you can find out more there, but essentially it’s all about creating an environment that focuses on Trust, Safety, Autonomy, Dynamic Goals and Lusory Attitude (that is you approach the experience with a playful attitude).

So where does the undo function in a bit of software like Word come into this, how is that helping with ludic design? Feelin safe is all about not fearing failure. If something goes wrong, you need to feel that it is possible to recover. If you fall over, you should know you can get up and try again – see where this is going?

The undo feature does exactly this. If you make a mistake in Word, just undo it. Got the function wrong in Excel? Undo it. Messed up your image in Photoshop? Undo, undo, undo, undo!!!

Being able to undo your last action, or actions means that you get to feel safe to explore and to experiment as much as you like. Not being scared of making mistakes can really help to get the creative juices!

So when you are designing a solution, see how you can include a way to take back the last actions a user has made, make them feel safe and secure that failure is not a bad thing!

I wanted to start 2021 off by talking about an incredibly satisfying gaming experience I had over Christmas. Playing Animal Farm on my phone.

For those that don’t know, Animal Farm is a very stark book written by George Orwell in the 1940s that uses power struggles between farm animals as an allegory for the rise of Stalin and Communism in the early 1900s. It is a classic, but may not be on many peoples radars these days – unless it is a school text! Like his other classic 1984, it is a story that feels a bit too close to our current political climate – with plenty of warnings about what can happen when people choose power over people.

At the end of last year, The Dairymen Ltd. published a game based on the book. Developed by Nerial, Animal Farm is a clever and deeply engrossing retelling of the original story. Playing like a mix of choose your own adventure style storytelling and a resource management game, you get to decide the fate of Animal Farm.

Depending on your choices throughout, the game swings from following the core narrative of the original, to forging its own path into new stories that feel as if they had been written by Orwell himself. It is so seamless that you never really feel you are straying from the original story, even though you obviously are!

As a game, it is not all that complicated. Read text, make a choice, repeat. There are plenty of secrets, medals, easter eggs and endings to be found, but the gameplay is not what makes this shine. It is the way the story is told and how important your role as the storyteller feels.  I’ve played the game through five or six times, and whilst there is repetition, the choices I make each time make the story feel fresh and new.

It proves that you don’t need to make a big flashy game to make a game that is engrossing and enjoyable. It shows that storytelling is really key. It also works as a master class in how to bring classic literature to life for a new generation.

If you are into serious games, gamification or any other related topic, I put this up with games like Home, Edith Finch, 80 Days and Fire Watch as an essential game to play to get a deeper understanding of how to tell non-linear stories with style and expertise.

Go to https://animalfarmgame.com/ to find out how to get a copy. Off you go, treat yourself!!

This is really cool. I didn’t make it either, Sinan Sensivas did.

It is an interactive mind map of my Hexad and game mechanics. It’s really fun and an interesting way to learn it all.

Take a look and say hi to Sinan on Twitter 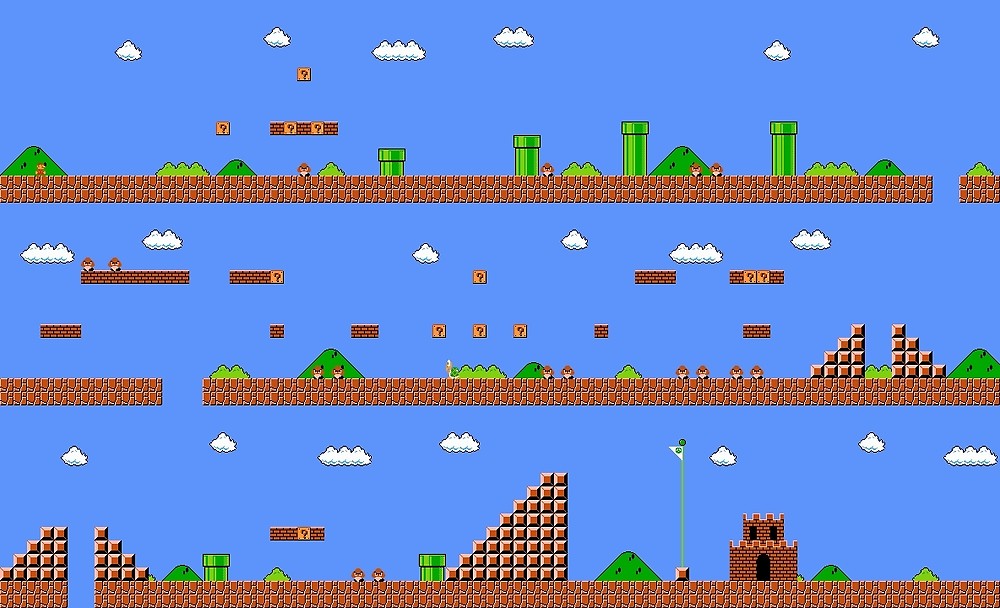 Super Mario Bros on the NES has been around for a very long time now, yet still, it exudes class and is a masterclass in game design. One of the reasons for that, in my view, is the simplistic choices that Mario has to make in the early stages of the game – especially the first screen. He has essentially four choices, two when presented with a bad guy and two when presented with an obstacle.

So, when Mario is faced with an obstacle, he can try to break – which might yield goodies or just clear his path. He could try to just move around or over it, or he can use it to get to higher parts of the screen (or lower if you consider a pipe taking him to bonus sections).

All those choices have value in different situations for him, but they are all simple.

When it comes to a bad guy, he can choose to jump on it or avoid it totally. Again, both valid options. In fact, it is possible to complete Mario Bros without ever killing a non-boss level bad guy! However, you are encouraged to kill the bad guys as it gives Mario more points and can, at times, help him reach new areas.

If we simplify things down even further, we could consider these choices as just Embrace it or Avoid it. If the obstacle is in my way, break it, thus using it, embracing its usefulness to open a new path. If it looks “hinky”, hit it and see what it does – again embracing it as useful. This might give you a special mushroom or coins. If you need to get higher up the map, use the obstacles to jump up. If it is in your way and seems to have no benefit – just avoid it!

With the characters in-game, most of whom are bad guys, we have the same basic choices. You could just avoid them if you see no benefit in engaging with them, or you could jump on them – using them to increase your score.

How Does This Relate to the Real World

Translating this into our lives, if we come up against an obstacle, we could ask ourselves “What would Mario do?” He would either find a way to make use of the obstacle, or he would find a way to avoid it. If we are presented in real life with people, we can again ask the same question. If he felt that in some way that interaction with the person would be beneficial, he would interact, otherwise, he would avoid them.

This sounds mercenary, but it really isn’t – it’s just a little oversimplified. For example, my youngest daughter. She enters the room to talk to me. I ask what Mario would do. I analyse that she is likely to want to speak about Roblox, so I could decide to take the option of avoiding her! However, I could also decide to make embrace her presence whilst she is there, by giving her a massive cuddle. This benefits me as it is awesome and makes us both feel good. So, I would say that listening to a conversation about Roblox, whilst having a cuddle is win win for us all! In the work world, this is very applicable to the people around you. Embrace the knowledge they have where you can and try to be kind to them.

Now we take the example of my eldest daughter. She is confronted by someone at school who isn’t very nice and wants to start an argument. She asks herself what would Mario do? He might decide to jump on the bad guy, but his only reason to do that would be to increase his score or get a jump boost. Fighting with this person in school does nothing to improve my daughter’s situation, there are no points to be scored to new areas of the school to be accessed by jumping on her head. In this situation, where there is no benefit to using the person, Mario would simply avoid them. Thus, my daughter would decide to ignore the bully and walk past.

The lesson here is to embrace the people who will enrich our lives in some way and avoid those who won’t!

On to obstacles. In real life, unless you are a free runner, you are very unlikely to be presented with obstacles that require you to physically break them or climb over them! However, we all have obstacles. Projects that we find hard to complete, topics we find hard to learn etc.

So, what would Mario do? Again, he would weigh up the pros and cons of making use of the obstacle in some way or avoiding it. If you are trying to learn something new, you must decide if it is really worth doing. Now, there are some subtleties to this. If you are at school, you have less choice. In Mario terms, these difficult learning tasks would be seen as the blocks that you either need to break through to get to new areas of the map, or the ones you need to jump on or use to get to higher sections of the screen. They can be used in beneficial ways. Same with projects and tasks you may be working on. They may be difficult, but they open up new opportunities on their completion. However, if something has no benefit whatsoever – avoid it! Don’t let worthless, draining obstacles get in the way of you doing greater things.

Again, the lesson is simple. Embrace those obstacles that enrich your life in some way and avoid those that don’t!

One last thought on this. If you come up against an obstacle that you know is of benefit to tackle, but you are not sure you can, think multiplayer, ask for help from those around you that you know can assist – I am sure that Mario would call on Luigi if he could.

This way you are blending the best of both worlds, working with someone who you know can enrich your life to tackle a problem that will also enrich maybe both your lives in some way!

So, next time you are faced with a challenge of some kind, be it people or task-related – just think “What would Mario Do – Embrace it or Avoid it?”